2 days of fishing in Norway

Me and my oldest daughter Ello have decided to go to Norway for some salmon fishing (and some shopping too). So we crossed the border on monday afternoon and reched our destination Steinkjer early in the evening. We decided to start our fishing thuesday morning so we did just hanged out in our cabin at the camp site rigging up our rods and reels and also did a short shopping trip to the AMFI Center in the city so everbody was pleased. We did also walk down to the pools below the camp site and had a chatt with the some friendly local fishermen that told us about the conditions and were to fish and not to fish as the water was very low because the lack of rain. 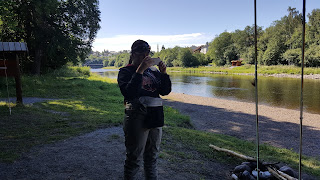 We started our fishing the next morning and the weather was realy sunny but a wind from the Atlantic ocean did keep the temperature down.
We fished the pool a couple of times and had some pulls on our flies but nothing more so we went to our cabin for lunch and a siesta. 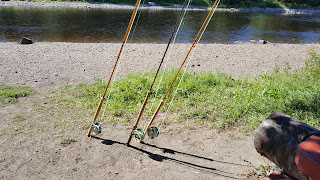 Later in the evening after a late dinner we went down to the river again and there were four local fly fishermens that told us that they they seen some salmons running the pool earlier in the evening but none of them had any offers. We started to fish with smaller black flies and when it got darker we changed to bigger black zonker flies and did fish until 01:30 but had no offers so we went to our cabin to get some sleep. 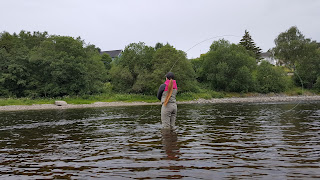 Next morning we went up early to fish and it was cloudy and the air temp was nice and cold but no bites on our flies all morning so after lunch we put the rods on the car and went down stream to try some other pools. The weather did change in the afternoon and the clouds vanished and the river level had dropped 20-30cm during the day. Both Ello and I had fish pulling our flies but they did not want to bite properly even that we tried all tricks in the book so we went back to the cabin and some snacks. 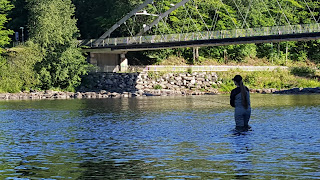 After looking at the weather forecast that did say +30c in the shade we decided to break up camp and drive back home to Sweden after a good nights sleep. We can say we was beaten by the weather but will try to go back later this summer if there comes rain so the river rises and get more fresh salmons from the sea running the pools. 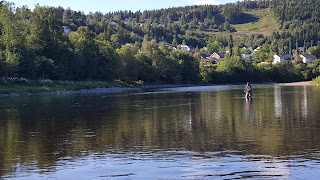 Fishing is not all about catching fish so we hade a realy great time anyway and Ello is a realy good flycaster/flytier and got a bright future in the sport.


A nice Youtube clip about the work that Harry and all other people in Strömgruppen are doing in River Harmånger. It was realy fun to get the chance to be part of the release of the parrs.
Upplagd av Tobbe Hedin kl. 14:05 Inga kommentarer:

On the last weekend in may I was invited to Skjern Å Lystfiskeri Festival in Denmark to tye flies and show some skagit casting. Me and my wife Kicki did arrive to Skarilld and our rented cottage already on thursday just to get some time to fish River Skjern and some shopping also. Had never before fished any one of the Danish rivers and the fishing there is not anything that I'm used to but did think it was intresting and will sure get back next year to try get a fish also.

The Festival started on Saturday morning and ended of Sunday afternoon. It was realy well organized by Nils Mogens Svalebøg and the other guys from the Angling Club in 1929 and a big thanks for the invite.


Did meet some great people like my good friend Mattias Drugge (Hardy) Stuart, Silja and Lasse from Baltic Fly Fisher, Claus with family from Skagit Anglers, Bjarne Laursen, Ali Hutchins from Scotland, Kim Sørensen (Hardy/Future Fly) Allan Kuhlman Hansen, Klaus Fløe Kristensen, Lars Munk, Bo and Søren from Korsholm and lots of other great fly tyers and fishermens. On Thursday we visited Korsholm tackle shop that are close to heaven for a fly tyers. On Friday morning we took the car up to Ulstrup to meet Mr Pro Sportfisher him self Morten Bundgaard and a big thanks for materials and coffe.

The Sea trout and The Shrimp

Had two nice days on the River Harmånger with three Sea trouts caught, two fish that came off and also some pulls on the fly. On the the third or fourth cast on friday morning I hooked up with a 75cm Sea trout that gave me a good fight and made my Hardy Bouglé scream a little bit. I had a new fly pattern at the end of my leader that did the trick and it always fun when a new fly delivers fish. The fly was a Shrimp pattern in peach colors and made with composite loops. Did loose one bigger fish that was on for maybe 5 seconds then after a cup of coffe and a short rest in the sun I did hook up with the second fish for the day. It was a realy good take and the fish went airbourne three time and did a good work bending my rod. After a while I could release a 65cm Sea trout and say thanks for the fight. After the second fish I was realy pleased and packed my stuff in the caar and went home.

Early on Sunday morning I was back on the river again and did fish for some hours with just a pull or two before I waljed further down the river to a pool I never fished before. I started to cast and with just my Commando skagit head and a couple of meters of shooting line I had the first very gentle pull on my Hares ear and brown shrimp fly but no fish on. Did some more cast at the same spot but the fish refused to take the fly again. I started to cast longer line into a realy bad wind and maybe after 5 meters of wading down the pool I got fish on. After a nice fight I could release another 65cm Sea trout and then I went up river again to try some pools but no more fish and by now there many people fishing the river so I decided to call it the day. 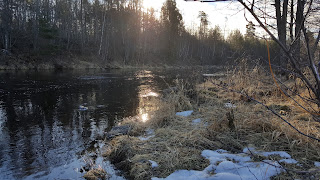 River Harmånger or Harmångersån meets the sea in the small village of Strömsbruk on the east coast of Sweden. Its a small river and the Sea trouts can reach realy goods size with fish over 90cm caught and realesed (it's just C&R and only single hooks allowed) so they can come back to spawn. The main part of the fishing is in the spring because it's a spate river and when the snow melts now in April the fish that stayed in the river over the winter starts to move down to the sea and new spring Sea trouts will enter the river. The river has the pontecial to be one of the most productive smaller rivers in Sweden but at the moment the fish can just migrate 1,5km up to  the first dam. There are a group of people working hard and doing a realy good work to restore spawing grounds both down stream and upstream the first dam. Hopefuly the first dam will be gone in a near future and in a couple of years the fish will have 50-60km more river to run and find new spawing grounds.

Here is some pics from the some of the lovely pools down i Strömsbruk. It' s well worth a visit in April and you have a chance to hook up with big Sea trout. 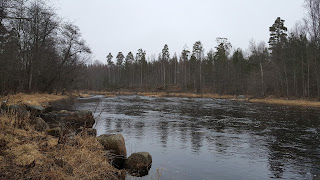 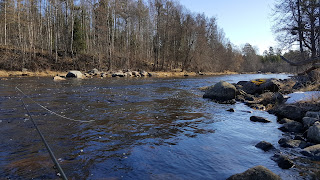 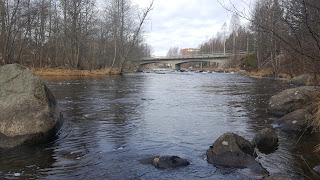 
Well I must admit that 2016 was not the best fishing year for me but have had a great year anyway when looking back. Did start the season a bit to late as I had other stuff to deal with so I did miss the best part of the spring fishing at my local river and I also cancled my trip to River Lainio. Got some great days in River Stjördal  in  August with my buddies Allan and Dick but the fishing was slow with low water but we had fun anyway. The autumn/fall fishing was not the best but I got some Sea trouts (sea run browns) both in Ljungan and in Ljusne.

The best things with last season was that my daughter Ello picked up here rod again after some years and quickly got back into the fine art of skagit casting. Also the new OPST Commando heads that are designed by Ed Ward and Jerry French was released and I realy love to fish with those short "magic" skagit heads.

I have some plans for the 2016 season that includes a trip to Denmark and the Skjern Å Lystfiskeri Festival in may and also some fishing in Swedish and Norway is on the agenda.
Upplagd av Tobbe Hedin kl. 10:21 Inga kommentarer:

A great set up that are easy to cast with and got lots of power to.

Tobbe Hedin
My name is Tobbe and I have been fishing and tying flies for Salmon and Sea trout for nearly 30 years now. I live close to the banks of River Ljungan on the east cost in the middle of Sweden with my wife and two daughters that also are fly fishing. When tying flies I like to mix diffrent material and contrast colours to get some new intresting patterns. Most of my fishing I do in River Harmångersån, River Ljungan and other Swedish rivers like Lögde, Lainio and Byske but I also fish River Spey and Dee in Scotland and The Tröndelag rivers in Norway. If you want to ask me some questions about skagit casting or flytying just contact me on: thspey@hotmail.com